I call it ‘Insect’ but you may have other ideas come to mind when looking at this amazing sculpture.

There is something alien and other-worldly about this piece.

Another piece inspired by Nikola Tesla, the great inventor and engineer who was a pioneer in his field. He was a true visionary, revolutionising the world with his ideas.
Both Insect and Tridua are sculptures in metals and light, intended to show my appreciation of that gifted man. 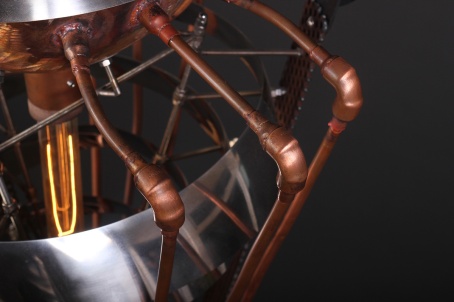 Arms of the sculpture lit from the inside

View from the top, shot against dark background

Insect in daylight against dark background

Body of the light sculpture showing inside and outside reflections

Full height of the sculpture at night

Insect viewed from the top in daylight

Insect looks great with or without being lit.
During the day Insect looks still, as if it was observing its surroundings. As dusk falls it awakens, becoming an integral part of its surroundings. If the room is faintly lit then multitudes of shadows can be observed on the walls and ceiling, reflecting the colours of the plasma.
The intensity of illumination of this light sculpture is controlled by a central round knob. As you change the level of light different elements within the sculpture are revealed or hidden.
Most beautiful are the copper elements when lit from within.

This project took months to complete but I greatly enjoyed playing with light, shadows and reflections.